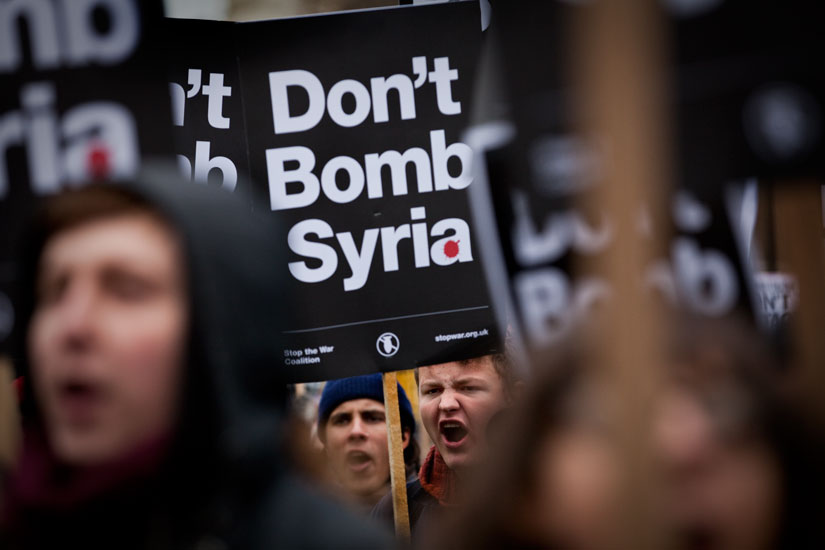 One of the chants of the protestor’s was : “Syria Syria don’t you cry… we won’t let your people die.” I have to say I did feel this was either total naivety or more than a little disingenuous. In the last 4 years 250,000 Syrians have died. The civil war continues to rage on at the same pace, clearly we will and have ‘let your people die’. It appears to me this, the protestors stated position, is the total opposite of considering the plight of people in Syria, to chant about ‘we won’t let your people die’ if we advocate doing nothing, or at least to continue the same as we have done in the last 4 years effectively nothing. Clearly people will continue to die in their tens of thousands in Syria.

I don’t think bombing ISIL will actually stop the slaughter in Syria but it may help some of the more progressive forces like the Kurdish Peshmerga to hold their ground and protect their people. It does seem to me to be the total opposite of internationalism or solidarity to only consider the death of a Syrian person as in anyway important or worthy of note if that Syrian is killed by a Western soldier or missile from a British plane. It really seems to me totally Eurocentric to only interest yourself in the deaths of Syrians if they are killed by Europeans (or Americans) and to ignore the quarter of a million who have already died killed by Assad’s forces or Hezbollah or IS or the al-Nusra Front etc. etc. Ignoring this slaughter treats it as irrelevant. To the extreme point of not even bothering to acknowledge these deaths have happened at all, or that mass slaughter continues a pace totally separate from any Western intervention aimed at trying to slow it.

But, having said that I do secretly wish that I could generate the same indignation against the Conservative Prime Minister David Cameron and all the other ‘war mongers’ in all the different political parties. I really wish I could generate the moral certainty that doing nothing was so vastly morally superior to attempting to do something…. Almost anything …. Against some of the worst slaughterers in Syria. But for me I have always felt myself to be something of an internationalist and an antifascist … and doing nothing seems like ….. Well, er …. Like doing nothing? ….. What used to be called ‘I’m all right Jack’ …. I understand the arguments against trying to do something …… but I just don’t find them in anyway more moral….. Ultimately I guess I find them kind of morally indefensible.

I remember back in the late 1980’s as a youth meeting some old guys who had fought in the International Brigades, individuals who had previously heroically volunteered to fight against the rise of fascism in Spain. Back when they were young men they left Britain and went to fight against Franco’s forces. This happened before the outbreak of the Second World War, the outbreak of the war finally signaled democratic governments had woken up and ended appeasement and began their own violent struggle against fascism.

So these men I met were amongst the first Brits to actually physically try and halt the rise of fascism during that era. I was completely humbled to meet these heroic men, they were people with progressive ideas, people who had embodied a left wing internationalism they joined the fight against fascism at incredible risk to themselves, many of their friends did not return. These were people who had very much opted to do something, when clearly they could have done nothing. They had bravely opted to personally and physically stand and fight against fascism when they were not even required to. On meeting these men I wondered wether I would have had their bravery in those circumstance, I doubted very much that I would.

There is a memorial to the heroic sacrifice of the International Brigades on the South Bank in London.Written on the memorial: ” ‘No Passaran’ They Shall not pass”. I met again some of these remaining few heroes at the opening of that memorial they were ‘proud to be on the left and were proud to be fighting for a world free of fascism, free of militarism, antisemitism, oppression and economic and social injustice’. Eric Blair who wrote under the pen name of George Orwell was long dead by the time Ken Livingstone’s Greater London Council saw fit to honor him and his fellow antifascists with the monument. He was dead before in 1977 when finally freed from fascism the freely elected Spanish Parliament returned. In 2007 that freely elected Parliament voted to honor all surviving members of the international Brigades with Spanish Citizenship. Orwell is one who’s contribution is honored by the memorial in London as he volunteered to fight in the British Battalion of the International Brigades. His bravery, idealism, his real world wisdom and experience, and his realism in face of evidence combine to make him someone who has aways been a cultural and political hero of mine.

The German parliament has also today voted to send aircraft and military forces to act in support of the coalition attacking Daesh, ISIS, ISIL, the terror group running the self declared Islamic State Caliphate in Syria and Iraq. So German forces will join in support of the coalition with Britain because on Wednesday night the British Parliament did vote to send offensive aircraft to attack ISIL in Syria as well as Iraq and have begun air attacks alongside French and American forces.

The Labour Party leader Jeremy Corbyn did not support the proposed airstrikes he was of course lionized by the ‘Stop the War’ protestors. But some Labour front benchers did vote with the government. At the end of the British parliament’s debate Hilary Benn spoke, he is the Labour Party’s Shadow Foreign Secretary ( he is also the son of the famed left wing Labour orator Tony Benn MP and has inherited his fathers speaking skills ) He spoke about solidarity with France and the need to protect Britain but in summing up he said to his own party the Labour Party:

” I direct my closing remarks to my Labour friends and colleagues on this side of the House. As a party we have always been defined by our internationalism. We believe we have a responsibility one to another. We never have – and we never should – walk by on the other side of the road.

And we are here faced by fascists. Not just their calculated brutality, but their belief that they are superior to every single one of us in this chamber tonight, and all of the people that we represent. They hold us in contempt. They hold our values in contempt. They hold our belief in tolerance and decency in contempt. They hold our democracy, the means by which we will make our decision tonight, in contempt. And what we know about fascists is that they need to be defeated. And it is why, as we have heard tonight, socialists and trade unionists and others joined the International Brigade in the 1930s to fight against Franco. It’s why this entire House stood up against Hitler and Mussolini. It is why our party has always stood up against the denial of human rights and for justice. And my view, Mr Speaker, is that we must now confront this evil. It is now time for us to do our bit in Syria. And that is why I ask my colleagues to vote for the motion tonight.”