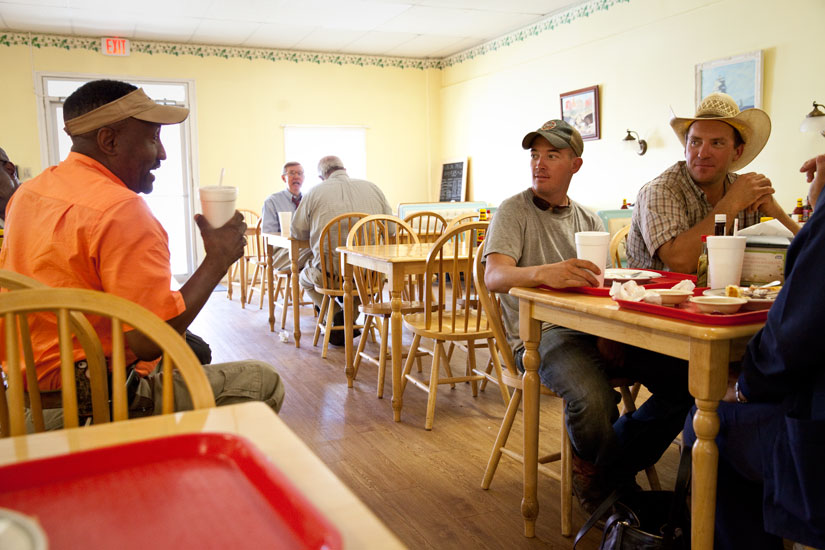 To mark the release of Harper Lee’s new book…… out today….. a reportage from her home town.

I am here because this is the home of Harper Lee, the legendary writer of “To Kill a Mockingbird”. Her fictional town of ‘Maycomb’ in the novel is modeled on this little southern town.

Against all expectations and very controversially, having been content throughout her life with just one novel, Harper Lee, now nearly 90, is about to release a second novel, today in fact, titled “Go Set a Watchman”.

It is related to the first book and is again based on her hometown but, as yet, little more than this is known. All we do know is that she wrote this new book prior to the first, and it was rejected by publishers before she went on to release her Pulitzer prize-winning sensation, “To Kill a Mockingbird”.

This prequel (or “sequel” as it features the character of Scout as an adult) has remained ignored, unread, unconsidered and unpublished for over 60 years. But this is all about to change: she has apparently granted permission for its publication and the literary excitement and pre-release publicity guarantee that it will be an instant bestseller. Some say she is vulnerable old lady, and the decision to publish is not hers.

So this town is once again braced and ready for close scrutiny. Harper Lee has a new security guard to keep prying eyes away from the nursing home where she lives. Throughout her life, she famously never spoke to the press, and it appears she is not about to start now.

Any visiting media folk in the town are seriously unlikely to become acquainted with its most famous resident, unless she suddenly has an about turn on this policy too.

The main thing that will strike any outsider visiting Alabama in June is the heat. It is sweltering and oppressively humid; I find it almost unbearable to be on the sidewalk in the direct morning sun.

So it’s a relief to step into the sanctuary of the small cafe, “The Sweet Tooth Bakery and Restaurant” – at last there is air-conditioning and the joy of escaping the all-enveloping pressure of constant heat. People have told me this is the place to be, and it immediately feels good.

In here, you’ll find the casual welcome and friendliness of country people, and the good manners of ‘The South’. But not the old-style ‘South’: a more human, decent and inclusive version, where working people of all races and backgrounds can enjoy food and company and relax together. There are no confederate flags in here.

This is Monroeville, a small town hanging on through constant downturn since the departure of the big manufacturing corporations, which had previously been the main employers and source of wealth. Now many shops and buildings stand empty in the square; there is a wistful feeling of falling away. But there is no proper blight; the town still clings on to gentility through its association with literature, even claiming the rather grand title : ‘The Alabama Capital of Literature’. It is true that Harper Lee did occasionally eat in this cafe in the past. But it’s said she did not join in the banter and merriment that now lifts the room. She did not chat, always keeping herself to herself or so I am told. I do not know, because I forgot to ask, whether her friend Truman Capote, the other literary giant associated with this town, ever ate in this cafe.

The beautiful young children playing their own cranky game of cards call to their mother as she serves food. I later learn they are the fourth generation of the Clark family represented in the restaurant. Behind the counter is not only their thirty-two year old mother, Erin Clark-Stable, and their fifty-eight year old grandfather, Tony Clark, but also, amazingly, their eighty year old great grandfather, Lloyd Clark, who began the business over 40 years ago with his sadly departed wife Mary Imogene Clark.

There is a lovely atmosphere in the restaurant at lunch time but there is no denying this is a demanding, unrelenting business, Tony comes to work at 4am every week day; he is the baker and head chef these days, although of course his mother and father were originally in charge.

He tells me he is always willing but his body fails him sometimes. He looks a little tired and yet he seems to have a lot of energy and a very high work rate. He moves rapidly and efficiently round the kitchen and out to the storeroom, nimbly bringing back the required flour or vegetables, he seems almost too speedy for such a big guy.

The rest of the family join him by 7-30am. No instructions are given, all know their role and get on with it. Only Rean Arthurine is not a member of the family but, like the others, she seems to know her work without orders or instruction. This sixty four year-old, softly spoken African-American woman has been working with the Clarks for over 11 years now.

This is an odd place, a proper professional kitchen with giant cake mixers and huge walk in fridges, but cross-bred in a peculiar way with a very small intimate family business, the children playing as the multi-generational family works around them.

Lloyd tells me with pride about the early days of the business. How it was his wife who had first taken the big step into being self-employed and how he had joined her as it became clear she was running a more than viable food business. He smiled as he told me how they made all the lunches for all the executives at the big corporations, and how one week in June a long time ago they baked the cakes for seven weddings.

His eyes fill with tears as he thinks of his beloved wife and tells me how she became ill later in life; their last conversation was just before she went under the surgeon’s knife.

The food they served back then and now has a 1950s innocence to it. Delighting in their cakes, they are truly proud of their top-of-the-line best selling ‘Red Velvet cake’.

They have cake and biscuits as the bakery products and they have savoury lunchtime food, proper cooked food for a full lunch served five days a week. Todays special is meat loaf with two vegetables.You need to come early as by one o’clock in the afternoon everyday all the lunch is all sold out.

There are many choices of vegetables to go with the different steaks and meatloaf. They always have a choice of meals and often have grilled chicken but they always have fried chicken.

This is ‘old school honest-to-goodness cooking’. But they are beginning to have a slight hint of a 21st-century doctors’ warnings about diet, which is just starting to cloud their 1950s innocent enthusiasm for cake. It is present as a shadow in a family discussion regarding body weight and the calories involved in eating ‘Red Velvet cake’.

A customer who has already had a triple heart bypass surgery is thinking about having the fried chicken, but Lloyd reminds her of her doctor’s warnings about keeping fried food out of her diet.

Sadly, his wife Mary Imogen died on the operating table with her arteries 97 percent blocked, as a surgeon attempted to open them in a similar procedure to the one the customer must have recently survived. No doubt Lloyd is thinking this as he reminds her to stay off the fried chicken.

This cafe does not evoke the ‘Mockingbird’ of the famed novel in its name let alone ‘Boo Radley’, ‘Atticus’ or even ‘Scout’, unlike so many other business in town, but I think watching Erin and Tony, it does have a claim to living out that rather wonderful relationship between father and daughter central to the story. More than that it could also claim a stake in altering the grim history of racism and separation portrayed in that first Harper Lee interpretation of this town.

The Clarks are a vey hard working and very close family unit. They offer a friendly and important community service right at the center of their local neighborhood. Their restaurant seems to bring the whole community together in a manner I did not see anywhere else in town: African Americans and white folks, people from all backgrounds chat casually at the counter and at the tables. Policemen and court officials talk with the mechanics and sales guys from Lee Motors. Women from the different churches chat on neutral ground.

Yes, ‘The Old Court House’, as portrayed in Harper Lee’s book, is a delightful, physically imposing building which dominates the town square. And yes, it forms the primary attraction in the ‘To Kill a Mocking Bird’ pilgrimage, drawing in the tourists, and it is undeniably a rather wonderful building. But just as in the book, where the Court House fails to deliver justice and equality under the law, ‘The Old Court House’ is largely just for the privileged. It is exclusively for the literary visitors, not really for all.

On the other hand ‘The Sweet Tooth’ is, in my humble opinion, ‘the heart of the community’ and feels like a genuine and refreshing move away from ‘The South’ of Harpers Lee’s depiction. Any visitor who wants to experience Monroeville in a truly authentic but uplifting “common man” way should drop in for lunch and maybe let go a little, drift a little from what their expensive Manhattan physician might be telling them, and try some of the truly excellent ‘Red Velvet cake’.