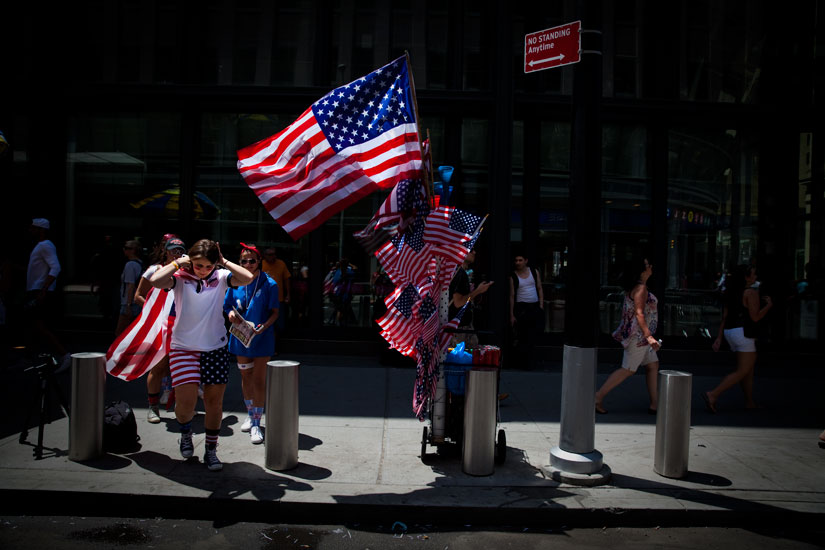 I shot a nice picture of Carli Lloyd doing a selfie of herself clutching the trophy during the ticker tape parade. She looked happy…. and well she might … having scored an amazing batch of goals in the FIFA Worldcup Final, securing the woldcup for the USA womens team.

New York City put on a ticker tape parade to celebrate the victory. The first ever ticker tape parade for a womens sports team. Thousands turned up on a beautiful day to celebrate in the so called ‘Canyon of Heroes’ close to Wall Street, now called the ‘Canyon of Heroines’ !!! :-))) It was an inspiring spectacle, just fantastic, especially for the young women and girls who are soccer players and fans and were in the crowd in their thousands to show their support for and appreciation of the team. Well done all those young supporters and players !!!! Well done New York City !!! . . :-)))) Mega well done USA womens soccer team !!!!!

The main shoot is for an assignment so cannot go up here ……. so here is a vendors flag in a shaft of sunlight after it is all over …… and just as the big clean up is about to begin. I thought it was a nice touch that some of the NYC sanitation workers that get to clear it all up … also got to ride in the parade .. and earned a great cheer from the crowd as they passed :-)))))))) XXXXXXXXX