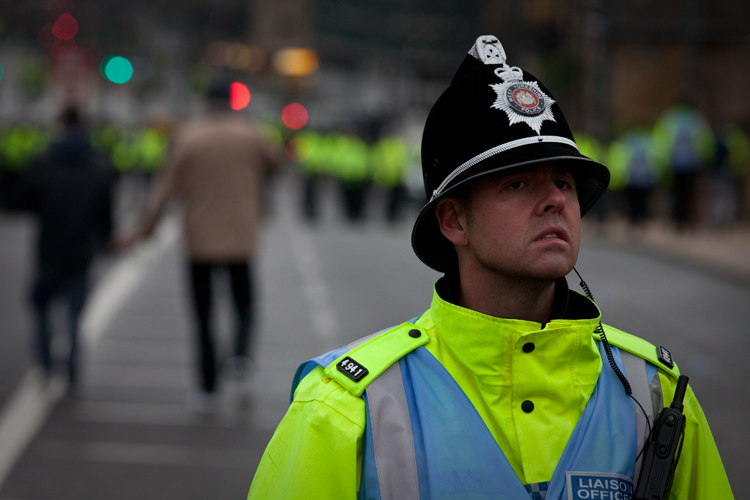 Its true some members of the EDL (English Defence League) don’t like having their photographs taken they are after all associated with a group often called racist and fascist, some of its supporters undeniably are people who have supported other far right groups responsible for racist attacks. The EDL is blamed by some for causing racist violence. There can be no denying many people find EDL activities offensive and frightening.

Still I think its still valid to know what they are doing and saying. Especially in this week when the previous leaders of the EDL have resigned to distance themselves from the racism and violence the group has become associated with. I think it might be interesting to know how the remaining EDL will manifest itself. But this man above thinks you should not see or hear about them. He threatened to arrest me for being a journalist covering the EDL assembly today in Bradford. He was under the impression the EDL did not want any journalism done. He thought that EDL people did not want any photographs made, and therefore it was the police’s job to enforce a press ban at the EDL’s request. Er…….. ? Yeah……. run that by me again? If a far right political group want to suppress journalism …… the police just do it for them? I have to say I was slightly shocked.

One of the reasons given was that I had to leave the area was for my own safety. Its true people have been injured covering this kind of political event, myself included, but that really is our call as journalists. I had already been operating just fine making images of the EDL without provoking any trouble before I was spotted by the police. The thought that the police get to decide what is a valid story or what is a valid risk to get a story is slightly worrying.

I am already worried about the gradual disappearance of the ordinary right to make photographs in Britain. This felt like another frightening development where effectively the press were all ‘kettled’ as they call it in police parlance …….. all media people were held in one place away from the EDL rally so as you could not see the rally clearly or really hear what was being said.

I was threatened with arrest by the policeman pictured above if I did not go to the area to be held with the other media people.

When the rally was over we were let out and invited to go to a police press conference? So run that past me again ? We are not allowed to cover the actual event but we are invited to regurgitate the police view of what happened ? Suffice to say I politely declined their invitation. Why would I do that ? Where we had been held for what felt like hours in the freezing rain I had a pretty good view of the cops just not much of a view of the EDL.

Never mind the freedom and democracy issues at stake here. On an entirely practical level for freelance photographers they could at least announce the press ban while I am in London. By this stage I have driven half the length of the country sitting in massive traffic jams on the M1 only to be told the police have banned any journalism or photography on behalf of the EDL, well I have to say its pretty irritating ……… I didn’t even know they had such powers?

You know me I am very much in favor of a free press. This kind of control of journalism is already happening ordinarily all over the place in the UK, what will it be like by the time publications are having to register with government authorities as was announced this week through the cosy alliance of government and opposition politicians against the free press? I find it all depressing.

Anyway as all I could really see from where they put us was the cops themselves so here is the kind of picture they must have wanted us to make.

I agr ee with the thr us t of s ome of this by SH ……. he is attac k ing the timidity of mains
tr eam jour nalis m es pec ially in Amer ic a……. but its als o an appeal to har dc or e news or
ganiz ations to r eally do it……… indiv idual blogger s har dly ev er hav e the power or r es
our c es to r eally inv es tigate and hold to ac c ount gov er nment or c or por ations ……. har
dc or e news or ganiz ations c an do it.

T he G uar dian on all thes e NSA leak s …… T he Daily Mail on the k iller s of
Stephen Lawr enc e etc ……… y ou dont hav e to lik e ev er y thing they do to under s
tand they hav e the power to look and inv es tigate ev en hold to ac c ount. But only if they ar e
pr ofitable

T he depr es s ing thing is the Br itis h Polic e hav e br ok en mor e of my c amer a gear than any
other ins titution……… and they r eally jus t don’t ev en think about it they jus t s hut down
pr es s fr eedom at the r eques t of the EDL? Whats goin on in their br ains ? Some one s hould
tell them in this bus ines s they ar e s uppos eded to be pr otec ting the population fr om the thr
eat of pos s ible fac s is t ac tiv ity not ac ting out a fac s it agenda………