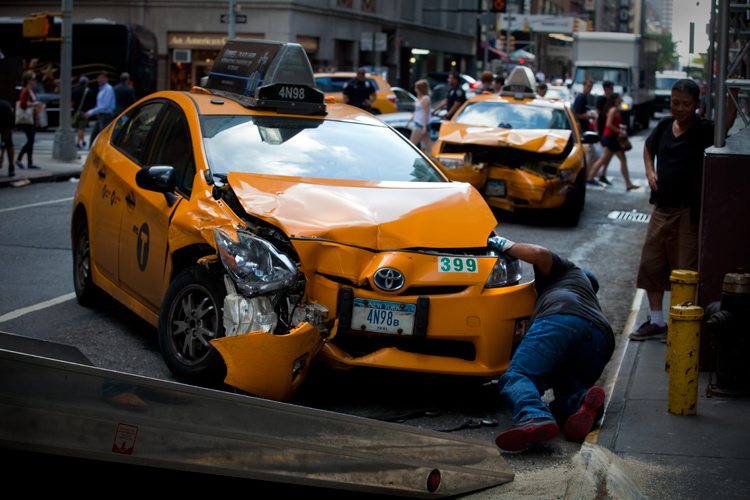 Image description:
“Eye Witness News…. NEW YORK (WABC) Two
cabs collided in Midtown, sending one of them onto the sidewalk and into a pedestrian on
Monday afternoon.
The accident happened just before 4:00 p.m. on Monday at 52nd Street and 7th Avenue.
According to investigators, a cab struck another cab traveling south on 7th Avenue. The second taxi careened toward the sidewalk.
Police say that one of the cabs ran a red light.
The cab struck a pole and a pedestrian standing near.
He was taken to the hospital along with the driver of one of the cabs. The nature of their injuries was not known.
The pedestrian was standing with his wife and two children at the time of the accident, officials said. They were not injured.
The cause of the accident is under investigation.”
Well I guess its gonna happen from time to time …… very sad that pedestrians were struck ……. And that a driver was injured …….. Some

onlookers were pretty scathing about how some yellow cabs are driven saying they were not suprised to see this …….. I am generally very
sympathetic to drivers …. as you know …. and I think most yellow cabs are very well driven. But I did think one of the drivers involved in this
was complaining too much about the slowness of the arrival of the tow truck ….. so that he could get back and get another cab……. fair enough
as he pointed out he was losing money ……. but I don’t know….. it just seemed inappropriate to go on and on about the money lost by the delay
when people …. including a fellow driver…. have just been injured in an accident you have been involved in …… an accident that was probably
caused by too much hurrying in the first place …….. I don’t know …. it all seemed a little inappropriate so I felt less warmly dispossed toward
this particular cabbie than I do normally.
I see from this study that yello cab drivers have less accidents than ordinary drivers in the city so passengers are safer in yellow cabs than
private cars. Proving that the majority by far a very well driven :))))))))
http://www.schallerconsult.com/taxi/crash06.htm
Cheers Jez XXXXXXXXXXXXXXXXXXXXXXXXX
www.jezblog.com
[ 8 ] comments
Amazing that you were right there to see this.
Kathy K @ July 18, 2013, 9:11 am
I know .. I have my methods hehehe…. Yes this is unusual to see a little sad… Luckily not fatal I think… :(((
XXX
Jezblog NYC iPhone :))
@ July 18, 2013, 2:53 pm
Its gotta happen aint it?.. Amount of traffic on the roads, sooner or later etc etc… As long as the people involved can`walk` away, then all
is good… Hope your well Bro..xx..ps take the train,no yellow cabs..unless your friend The King is your driver of course..
PaulS @ July 18, 2013, 3:09 pm
If King is driving its a right royal ride every time :))))))))
Sorry about waking u bro hehehe…….. I was ranting hehehe…….. Cheers
Jez XXXX
jezblog nyc :))
XXX @ July 18, 2013, 11:34 pm
Hee,hee.. Dont worry Buddy, I was awake anyway,and its a pleasure to hear off you at any time, moaning or whatever..Hope the body
has recovered today.. Remember, No Pain, No Gain!!..thats a load of bull by the way,as I`m gonna find out on Tuesday at the hospital
:>)….Stay Safe Bro..
PaulS @ July 19, 2013, 4:26 pm
uh oh pain at the hospital can be followed by gain…… but it remains pain…….and sometimes its only pain ://///////
Hope pain is not
too bad followed by amazing all you could wish for gain bro Cheers Jez XXXXXXXXX
jezblog nyc :))
XXX @ July 19, 2013, 4:30 pm
Its nothing major Mate,just having a look at another part of me thats falling apart..hee,hee…ps Bernie said, and I quote… `Wake her up at
2 am again,and New York wont be big enough for you to hide in!`… Some people just love their sleep dont they?..I think shes joking,but
sleep with one eye open just in case..Stay Safe Bro…. if you can..ha ha
PaulS @ July 19, 2013, 5:32 pm
hehehe……. luckily I don’t sleep :))))))))
hehehe….. Sorry Bernie :)))))
Cheers Jez XXXXXXXXXXXXXX
jezblog nyc :))
XXX @ July 20, 2013, 12:20 am