Hunting Deer : On the Wooded banks of The Chattahoochee River : Georgia 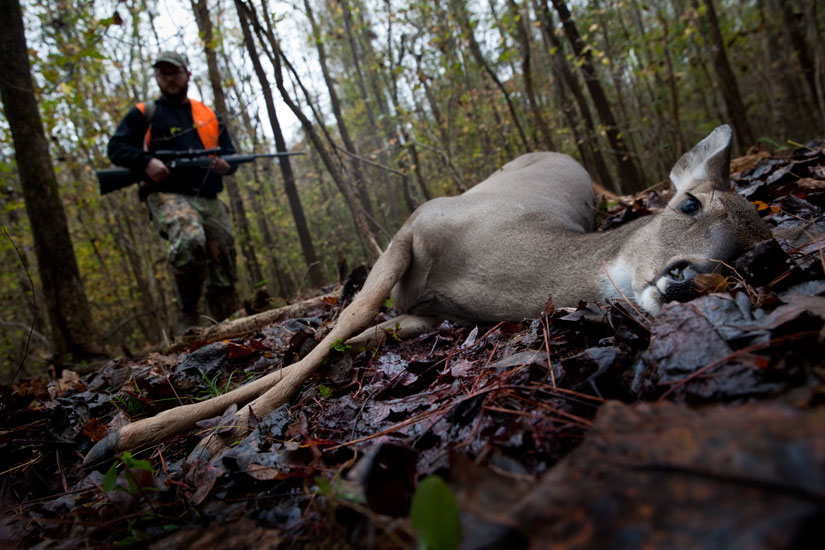 Well, I have been meaning to photograph hunting for a while. It’s an important phenomena in America. Really a lot of folks make hunting a central part of their leisure time. More than that being a hunter is a profound aspect of your identity if you head for the wilderness with your gun on a regular basis. In fact hunting really is an important aspect of American culture for some. Hunters tend to be amongst America’s most responsible gun owners they take seriously their hunting and the principles and practice of gun ownership. So I have been thinking for a while its important I should go on a hunt with my cameras.

So, Matt has engineered it for me to go out with a friend and neighbor of his ….. Mike.

So its all going to plan the alarm goes off at 3-45AM. Its seriously dark and early and totally pouring with rain but I am rolling in Mike’s pick up by 4-30AM ……….. Mike is a great guy, an incredibly well informed interesting bloke …….. So we are having literally the most wide-ranging conversations about the ethics, politics, history, culture and the societies of different countries across the world …… Not what you might expect hanging with a hunting guy ‘down South’. Well, I had been vaguely expecting the classic stereo-type if I am honest, and Mike is certainly not that. As I was rolling in his pick up at this ungodly early hour I found Mike was totally fascinating and completely awake and on the ball unlike me. He was on it … just great.

Hanging with Mike in the hide having whispered conversations and watching the wildlife listening to the river constantly flowing by was real privilege. Although it was a very long day it did not drag. He let many deer pass as they were does, he was hoping for a buck. In the end as the day was drawing to a close he decided he would take a doe after all.

He took one shot. It was totally shocking after the quiet of the day. The shot was incredibly loud in the hide, kinda devastatingly loud. It was an excellent shot the deer dropped almost instantaneously, later inspection revealed it to be the most clinical of kills. A single shot through the heart and lungs without even damaging the shoulder meat. A perfect shot.

But as we approached the deer I felt sad. Such a beautiful animal cut down. Now instead of moving gracefully and silently through the woods her carcass had to be dragged back to the vehicle at the top of the hill side.

At the top her carcass was expertly butchered by Mike with assistance from his friend Dan. Dan uses many French Charcuterie techniques to make all sorts of interesting foods from the venison meat so none is wasted. So there can really be no ethical challenge to any of this for anyone who is not fully vegetarian or vegan, and yet, I find again what I already knew, that I could just never do it. The killing and the butchering is something I could just never do as part of a leisure pursuit.

Mike and Dan and family would eat well tonight and for days to come, but I would not have the heart to eat any of the deer myself.