The Map does not Describe the Territory : HANAC NYC Taxi Academy : Queens 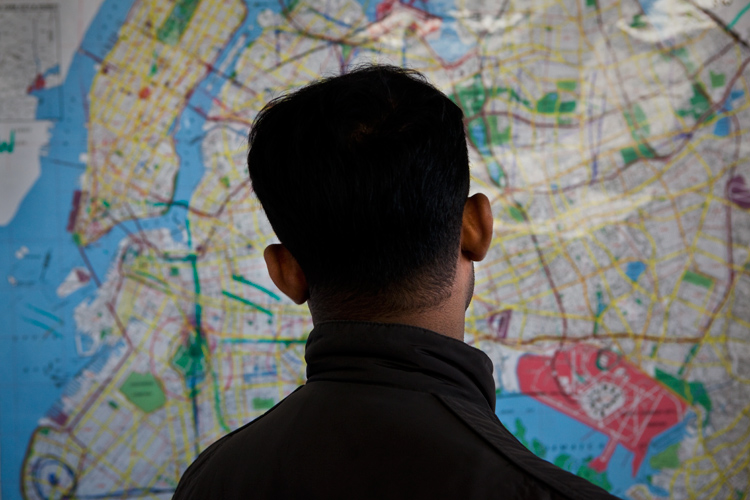 A Map of The City

I stand upon a hill and see A luminous country under me, Through which at two the drunk sailor must weave; The transient’s pause, the sailor’s leave.

I notice, looking down the hill, Arms braced upon a window sill; And on the web of fire escapes Move the potential, the grey shapes.

I hold the city here, complete; And every shape defined by light Is mine, or corresponds to mine, Some flickering or some steady shine.

This map is ground of my delight. Between the limits, night by night, I watch a malady’s advance, I recognize my love of chance.

By the recurrent lights I see Endless potentiality, The crowded, broken, and unfinished! I would not have the risk diminished.

Thom Gunn’s poem describes his personal view of San Francisco and is specific to him, that time, and his city but it has aspects that could almost describe a photographers view of New York City looking down from on high.

I heard Tom Robinson introduce this poem on a radio program I was listening to this evening : ‘A lifelong fascination with maps leads Tom Robinson on an unexpected journey into the space between the map and the territory. Mapping The Territory BBC R4 Radio‘ This program is an interesting exploration of the whole concept of maps and mapping and the human sense of them. From mental maps to the physical and their role in conveying the territory, time and ideas as well as just topography.

I’ve always loved physical maps myself. Sometimes they are hard to get hold of now on assignments. Everyone is expected to have a GPS so shops and gas stations have stopped stocking maps in many places. I have a GPS of course but I don’t have the same feeling for the lay of the land without a map.

Maps have been up in my mind anyway as today I was watching new recruits to the possibility of joining the ranks of New York Taxi drivers. They were at the HANAC taxi drivers school all struggling to learn the maps of the 5 Boroughs of New York City in the hope of passing the geography section of the taxi driver exams.

Learning the necessary rules and regulations for the strict test never mind all the geography of the city is no mean feat for anyone but it’s a big task for many at the school because they are not native New Yorkers and their first language is often not English.

My fave piece of obscure information I picked up during one of these classes : What’s the name of the body of water running underneath the Bayonne Bridge? (a bridge between Staten Island and New Jersey) ………. Answer : The Kill Van Kull.

How many New Yorkers would know that ?? Never mind folks just arrived in the city. Still I shall not forget it now :-)))))