Family in Havana : Poetry of the still image in History : Cuba 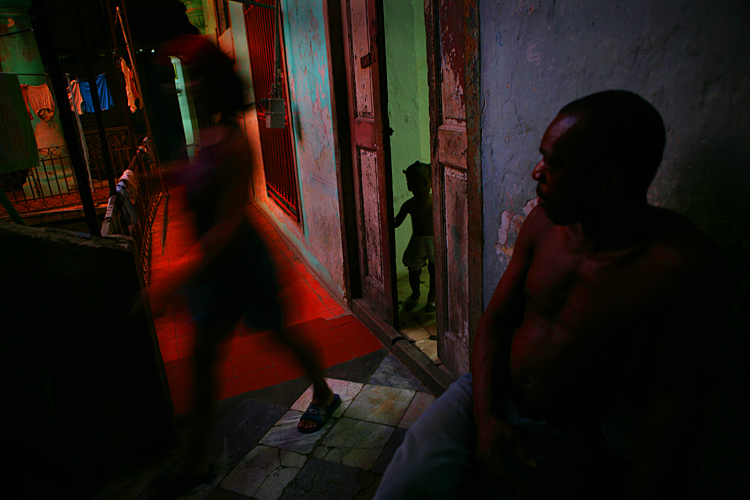 Castro Moves Into the Havana Hilton BY SANDRA M. CASTILLO

The afternoon lightening his shadow, Fidel descends from the mountains, the clean-shaven lawyer turned guerilla, his eyes focused on infinity, El Jefe Máximo con sus Barbudos, rebels with rosary beads on their 600-mile procession across the island with campesinos on horseback, flatbed trucks, tanks, a new year’s journey down the oldest roads towards betrayal.

Light inside of them, nameless isleños line El Malecón to touch Fidel, already defining himself in black and white. The dramatic sky moving in for the close-up that will frame his all-night oratory, he turns to the crowd, variations on an enigma, waving from his pulpit with rehearsed eloquence, a dove on his shoulder.

This is a photograph. This is not a sign.

Beyond photographs, Havana is looted and burned. Women weep at out wailing wall, El Paredón, where traitors are taken, and television cameras shoot the executions, this blood soup, the paradoxes of our lives, three years before I am born.

But it is late afternoon, and a shower of confetti and serpentine falls from every floor of the Havana Hilton, where history is a giant piñata, where at midnight, Fidel will be photographed eating a ham sandwich.

I read this today on the poetry foundation webpage http://www.poetryfoundation.org/poem/239734 and found it kind of startling. Thinking in bursts of the visual. The visual memory of images and politics catagorized primarily by how the images were made. Society, revolution and history defined in terms of the remembered stills. Thats what I do too.

The soldiers for Castro ‘heading down the oldest road towards betrayal’. To victory yes we know but also to betrayal ? Thats what it says. I guess meaning who amongst them would have thought the young previously clean shaven lawyer who inspired so much hope would move into the Havana Hilton and go on to become the old bearded dictator still clinging to power 50 years later ?

It might……. but I don’t k now…… Neo Liber alis m pr obably look s pr etty good to the
Cubans of Hav ana es pec ially ……. s adly people ar e s o gr indingly poor and filled with env
y at the appar ently r ic h tour is ts v is iting …….. it c ompletely des tabiliz es inter ac
tion with loc al people if y ou do v is it ……… may be ther e is a way to mov e out of ec
onomic s tagnation in Cuba s till k eep high liter ac y and medic al s tandar ds ……… and
impor tantly mov e away fr om pr is on for jour nalis ts and dis s idents that s ay the wr ong
thing……… may be end up with a better plac e for all :­ ) ) ) ??
Cheer s J ez XXXXXXXX