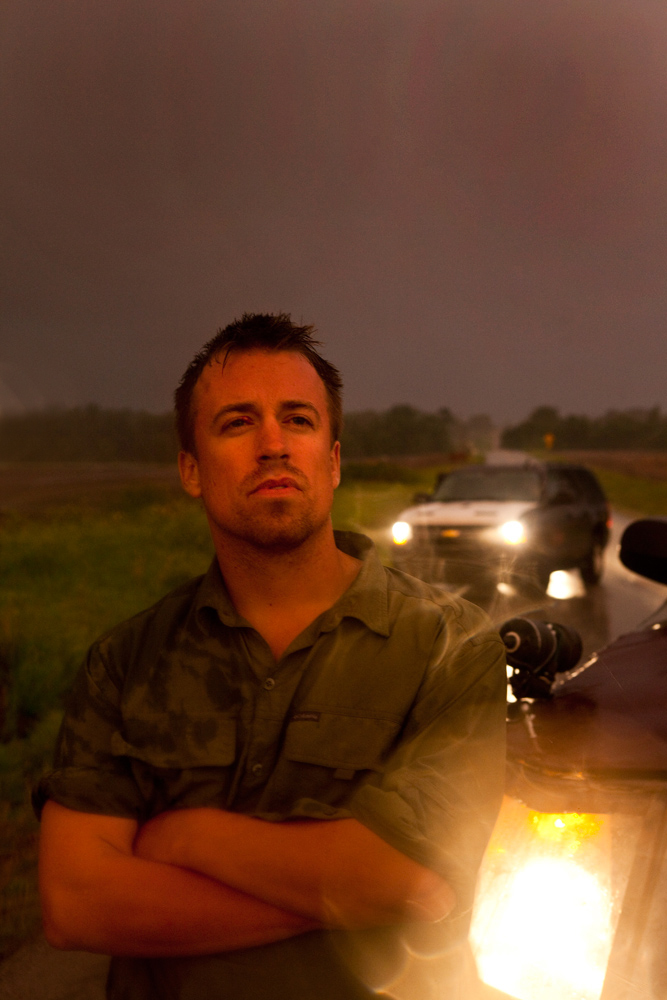 I was so sad to see of the deaths of veteran storm chasers in new tornados in Oklahoma. Tim Samaras, 55, founder of the tornado research project, called Twistex, based in Lakewood, Colo.; his son Paul, 24; and their chase partner, Carl Young, 45, all died after they were overtaken by a multiple-vortex tornado that sharply changed direction near El Reno, Oklahoma. So terrible for their families and their friends. Sadly, I guess its bound to happen eventually to some professional chasers, no matter their knowledge, experience and the safety measures they take. In the end tornadoes are just too dangerous to be that close to without always taking some risk of disaster.

I had already this weekend watched footage shot from inside a chase car that was caught and rolled numerous times by a tornado but luckily all those guys survived relatively unhurt even though their vehicle was completely destroyed. But obviously Tim and his team were less fortunate, one body was found still in their vehicle the other two half a mile apart in different directions.

There is some controversy about Storm Chasing and the risks taken. But when I was in Oklahoma last week I was so impressed by how the desperate warnings of the live TV storm chasers had saved so many in Moore ……… how they had seen it and called it right ………. “This is an unsurvivable storm if you are not in an underground shelter” …….. With very accurate path and timing……. They told people ‘to get underground or get away’ ……….. In my opinion those real time warnings given in the minutes before the most powerful tornado ever recorded ripped through Moore……… literally must have saved hundreds of lives. I was impressed that the chasers had done so well to predict see, understand, record and warn of the danger. Those guys really are a breed apart after all they know better than anyone the forces unleashed by tornadoes but they are up close and personal with those forces and with that real risk. All in a selfless attempt to learn about and warn others of the path of tornados in real time

The photograph above is of Reed Timmer a leading storm chaser I worked with a couple of years back……… He really is a fantastic bloke very passionate about his work …… I shot this picture like this to leave space at the top for the magazine mast head……. I thought then and I think now……. these guys deserve to be on the covers of the top magazines. Sadly with my story he did not get on the cover…….. but he did get a couple of double page spreads in the Sunday Times Magazine (UK).

I want to pay tribute to Tim Samaras, Paul Samaras and Carl Young who have died doing their important work and to all those other TV storm chasers like Reed, informing people of the exsistance and paths of deadly tornadoes. I salute you all for your service and mourn with you the terrible loss of your friends.

[ 8 ] comments
Desperate news for all concerned.. I can understand why people would view these guys/girls as `loony toons`,for wanting to do this sort
of thing,but,as you stated, without their input,the deceased total may have been much higher… More bad news for you again Mate..Keep
Smiling Bro….Stay Safe xx
PaulS @ June 3, 2013, 3:02 pm
Yes this is a sad one……… like I say I was marvelling at the input of those TV storm chasers for the actual Moore F5 as it formed
and moved toward the town …….. and as I drove under the storm front that had created the massive Moore F5 Tornado I was
listening intently to radio stations rebroadcasting the chasers up to date input about actual tornados touching down….. and the
counties that were at most risk from the possibility of tornados…….. when you are driving into that stuff you start to have a real
appreciation of what that information might mean in terms of life or death……….. yeah its a sad one bro ……
Cheers Jez XXXXXXXXXXXXXXXXXXXXX
Jezblog London :))
XXX @ June 3, 2013, 3:52 pm
Nice portrait. I like the way the headlights have come out in this shot
Navin Harish @ June 4, 2013, 1:49 am
Yes its raining water on the lens……… slightly doing in the cameras no doubt but it gives a fab effect in spreading those highlights
coming out of the headlights :))))))))))
XX
Cheers bro Jez XXXXXXXXXXXXXX
Jezblog London :))
XXX @ June 4, 2013, 5:30 am
I can see this on the cover of Magazine 🙂
kathy K @ June 4, 2013, 11:17 am