The Gospel and the Gun : Glenrock : Wyoming 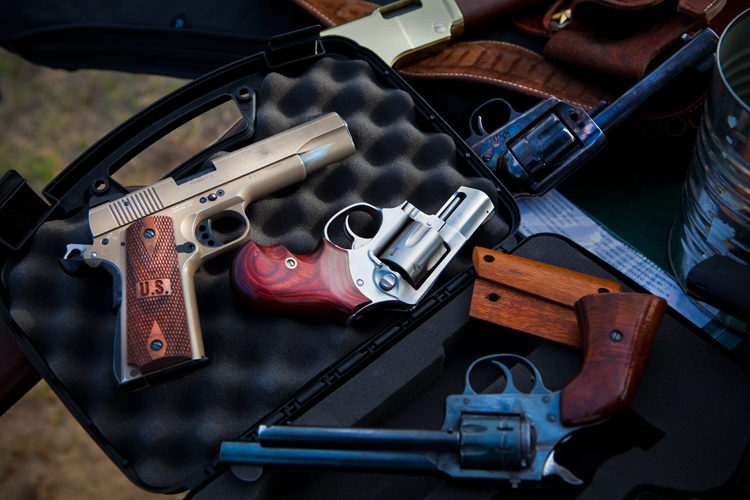 It’s an odd contradiction especially from a European perspective and yet it remains true……… some of the friendliest people in America have the most guns ………. These are only a few of the weapons that belong to a Pastor I met at a gun show in Casper Wyoming ……… yeah from a European perspective that seems more than a little odd too …….. an armed vicar ? …… hehehe …………. Not something you would ever see or dream of in the UK ………. He even told me he has on very rare occasions given his sermons wearing a side arm ………. That would probably not go down that well in your average Church of England Parish lets face it ……… hehehehe………. Still, each to their own I guess ……… and I have to say he was amongst the most friendly and open people you could ever hope to meet ……… he invited me to photograph his church and his congregation…………. When I went round they too were completely open and welcoming and very relaxed with me and my photography ……….. :-)))))))))

[ 18 ] comments
“When I went round they too were completely open and welcoming and very relaxed with me and my photography.”
Welcoming of you and very relaxed with you and your photography? Clearly they must be naive or crazy … hee hee ;)
🙂
Lynda @ May 6, 2013, 8:29 pm
Yes clearly :))
Cheers Jez XX
Jezblog Montana :))
XX @ May 6, 2013, 9:26 pm
Aw come on that’s not right… They are supporters of 2nd amendment rights clearly… And they are also supporters of first
amendment rights too…. They have nothing to fear from the right to free expression and honest reporting… I shot some lovely
pictures of their Sunday Services… I am sure you would agree they embody American Christianity when u see them… Rather lovely
images of families gathered together at their small church… :)))
XX
Cheers Jez XX
Jezblog Montana :))
XX @ May 6, 2013, 9:59 pm
Okay, alright … no doubt they are very lovely and hospitable folk … I do look forward to seeing the pics of their little church …
yet I’m firm believer in the old adage: live a virtuous life, practice hospitality and generosity, but never ever trust a tall, greeneyed,
British man with a camera … 🙂
Lynda @ May 6, 2013, 10:15 pm
Well luckily it does not say that in the good book…. And the true Christian people of Wyoming are true to the word…..
Matthew 25:3446
ESV / 149 helpful votes
Then the King will say to those on his right, ‘Come, you who are blessed by my Father, inherit the kingdom prepared for
you from the foundation of the world. For I was hungry and you gave me food, I was thirsty and you gave me drink, I was
a stranger and you welcomed me, I was naked and you clothed me, I was sick and you visited me, I was in prison and you
came to me.’ Then the righteous will answer him, saying, ‘Lord, when did we see you hungry and feed you, or thirsty and
give you drink? And when did we see you a stranger and welcome you, or naked and clothe you? …
Cheers Jez XX
Jezblog Montana :))
XX @ May 7, 2013, 12:07 am
Jez, are you running around naked again? Seriously, you need to stop that. It’s not right, and more to the point: you
without your clothes on frightens people.
Lynda @ May 7, 2013, 9:20 am
I was a stranger and you welcomed me …….. seemed to be the apt bit………. :)))
Jezblog Montana :))
XXX @ May 7, 2013, 10:05 am
What happened to ‘Thou shall not kill’ and ‘Turn the other cheek’, surely the rev is contravening his terms of employment?
Hugh @ May 7, 2013, 3:22 am
I never did have that conversation…. although I have a feeling his church gives a lot of regard to the Old Testament too……. he
spoke hebrew and had spent a fair bit of time in Israel……… obviosly the Old Testament has more stories of how the believers
overcome non beliviers in battle etc……….. so thats probably how you get to being an armed Pastor :)))
Cheers Jez XXXXXXXXXX
Jezblog Montana :))
XXX @ May 7, 2013, 9:02 am
Turns out that Eddie Shah really was the exploitative, manipulative, abuser of the more vulnerable that we all thought he was three
decades ago…press barons do seem to universally be monsters sometimes!!
Red Robbo xx @ May 7, 2013, 1:09 pm
PS like the chrome snub nose walnut handled revolver..good for close up and personal spreading of the word of Jesus
Redduss Corkuss xx @ May 7, 2013, 1:12 pm
You know you are armed with the power of the Lord with that one bro :)))))
Jezblog Montana :))
XXX @ May 9, 2013, 2:17 pm
You really believe that they welcomed you more than the `friendly` guys who tried to throw you out of the church in Birmingham UK?..
Next time, take the Vicars view, and carry a gun.. I`m sure most people would be willing to sit and let you get on with the shooting..with
the camera,which is a Canon?… Enjoy the rest of your journey Bro..Stay Safe..xx
PaulS @ May 7, 2013, 1:40 pm
Yes, its hard to know if that was a Brummy Catholic way of welcoming me…….. but it felt kinda hostile i have to say …….. being
physically ejected from the church and all……… I think the Pope must have added a few words to the Midlands gospels ” I was a
stranger and you welcomed me bit” changed for midlands churches to “I was a stranger with a camera and you had me physically
ejected” ……. yes these guys in Wyoming might be armed to the teeth but it did feel a lot more friendly and welcoming bro theres no
getting away from it ……… :))))))))
Cheers Jez XXXXXXXXXXXXXXXXXXXXX
Jezblog Montana :))
XXX @ May 9, 2013, 2:16 pm
“Oh my God.. he’s got a gun.. no… he’s got four!” You could go your whole life in the UK and never see a gun unless you’re looking at
ceremonial guards in London or at an airport. Weird, really.
Lee @ May 7, 2013, 2:30 pm
Yes this is only a few of his handguns he has more….. and a pile of rifles………… its a different culture entirely…….. by the time a
preacher has guns you know the sort of British thought that guns are only for the army and the odd gangsta has completely gone
out the window ……. It does feel odd even to me now that I have got more used to it……….
Cheers Jez XXXXXXXXXX
Jezblog Montana :))
XXX @ May 9, 2013, 2:07 pm
No…not guns, not guns ?…what happened to UFO,s and Devil’s Tower and all that ?