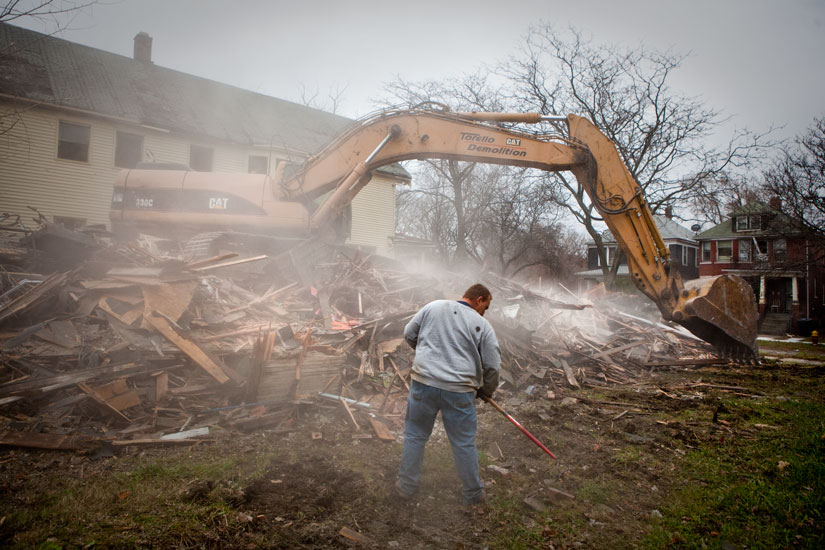 Detroit …… you need to have been here ……… to have any kind of understanding of this place …….. This city really is the poster child of the terrible issues of urban blight and economic collapse …… a blight that devastates neighborhoods ……… traditional neighborhood homes here are literally collapsing with the destruction of the economics that had previously supported and nurtured these communities ……… the thought of all the stories of desperation that seem to emanate from each rotting empty home brings me down …….. and yet somehow Detroit keeps on fighting …… the people here really are great ……

The official motto of the city seems weirdly prophetic …… This from the Wall Street Journal :

“We hope for better things; it will arise from the ashes”

That motto, Detroit’s, comes from a French Roman Catholic priest, Father Gabriel Richard. He was born in France in 1767 and moved to Baltimore in 1792 to teach math. Reassigned to do missionary work, he moved first to Illinois and later to Detroit, where he was the assistant pastor at St. Anne’s Church.

St Anne’s Church, in the southwest part of the city, stands between Michigan Central Station and the Ambassador Bridge. It was founded in 1701 and could be the oldest continuously operating Roman Catholic parish in the U.S.

On June 11, 1805, a fire destroyed nearly the entire city, weeks before the Michigan Territory was established. It was that fire that led Mr. Richard to write: “Speramus meliora; resurgent cineribus.”

I spoke to these men demolitioning an empty foreclosed home in the East of the city ……. one told me their small demolition company can sometimes demolish 300 properties a week ….. another giant number popped into my head as he said this … I think its 68,000 more Detroit homes …….. have just begun the process of being foreclosed………