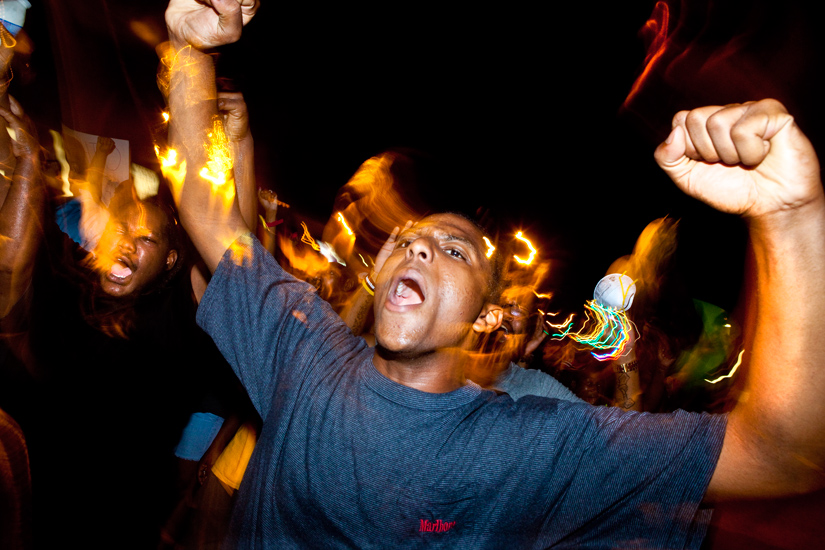 I spent most of the night out on the streets of Ferguson Missouri ……… The local community is protesting against the killing of Mike Brown a young African American man by the police of this city …………… the good news is although there were some incidents it was nothing like the level of conflict and violence that has characterized the nights of protest and the police response to it until tonight ………….. I did not have on a helmet or a gas mask or indeed body armor ………… but as it turned out I was just about correctly kitted out ………. not many bottles were thrown…… there was no shooting……. But many journalists expected serious trouble and wore all of their protective gear as a sensible precaution …… my stuff is all in London for use in the Middle East ……… With so many media people dressed this way It kind of reminded me of working in Iraq …….. That feeling made me even more sad to think about the depraved murder of the American Photojournalist James Foley…….. so terrible that his life was ended in such a disgusting way by the barbaric Islamic State terror group …….. murdered in the most depraved way by a hooded man with a British accent ………..

Our work here in Ferguson is important …… to shine a light on issues of militarized policing and issues of race in policing …….. brave journalists like James Foley were shining a light on the suffering of the Syrian people ……. journalism is important ……… the risk of doing journalism on these streets is as nothing compared to the risk of working in Syria. James Foley knew the risks. He had been taken hostage before but had lived to photograph another day ……… this time it was different he was held by the nihilists of The Islamic State ……. it now appears his luck has run out in the most horrific way. His murder simply depresses and frightens me …….. it threatens all decency with such dehumanizing behavior . So terrible to think of James Foley’s poor parents ……… My condolences to his family and friends ………. and to the family and friends of Michael Brown.