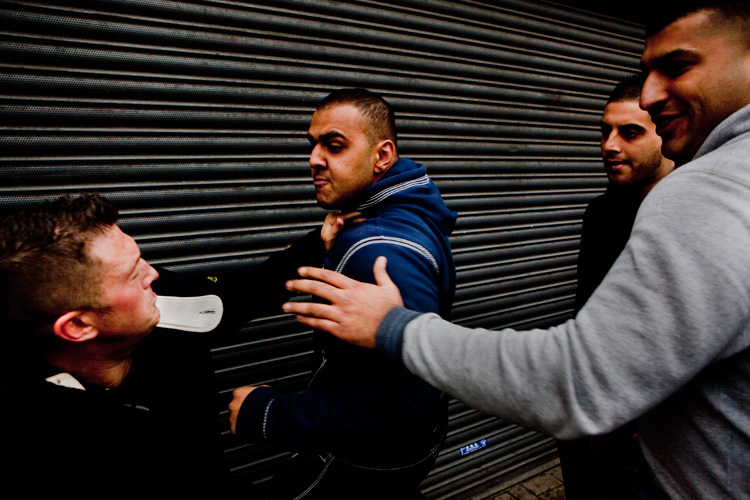 I see Tommy Robinson the founder of the EDL has been attacked and beaten up today in prison. He fears the authorities are doing nothing to protect him. Even deliberately leaving him vulnerable to attack by Muslim prisoners. I expect thats true. I did a story about the EDL for the Sunday Times Magazine and spent some time with Tommy Robinson I watched him attacked and beaten up but the authorities specifically chose to do nothing to defend him or to find and charge his attackers.

It is perfectly possible to be very hostile to the politics and actions of a person like Robinson without thinking he should be treated as if does not deserve the ordinary protection from violence under the law.

By the time I spent time with him he had left the EDL. He had publicly disavowed all racism and condemned far right racist elements operating within the EDL. He had joined with The Quiliam Foundation the Muslim organization against extremism. You know I felt the police should at least give him the ordinary protection of the law…… after all……. Thats their job ………. And possibly he might even lead others in the EDL away from racism and extremism …….. Anyway the police are supposed to without prejudice simply uphold the law but I watched them specifically choose not to uphold the law specifically allowing Robinson to be attacked then choosing not to investigate the attack on him.

I watched an unprovoked attack on Robinson. I photographed it, an American TV crew filmed it, we jounalists clearly all saw and recorded the actions of the attackers as did others but the police were not interested they did not want statements of any of the many witnesses or evidence of any attack, they left almost immediately as they were leaving the attackers were still present, I asked the police not to leave to afford him and us few journalists some protection. The officer told me they were under instructions not to intervene in these circumstances. They left deliberately allowing Robinson to be attacked again. Robinson has the classic working class thing of standing his ground not running, but he was worried because of the possibility of knife attack. Some of these Muslim blokes who were attacking him because in their view he had denigrated their religion intimated they had knives as they threatened and attacked Robinson.

Robinson told me later he had suffered hundreds of attacks like these and the police had investigated none. You know I would not have believed that if I had not seen some of it with my own eyes.

As you see above my photograph clearly identifies the people who carried out the completely unprovoked attack on Robinson as he walked down the main street in Luton. He did not run or back down but he did not fight even after he was repeatedly attacked, he was clear that if he fought at all, even to defend himself, the police would arrest only him, because that would then fit their narrative of these kind of events.